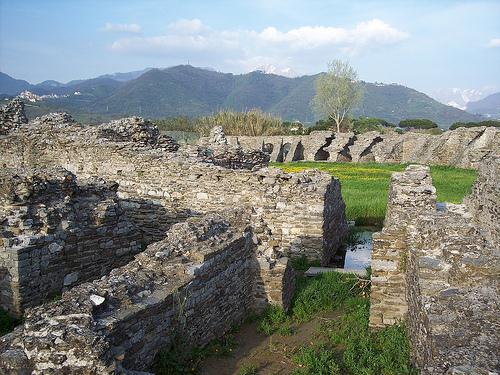 The archaeological site of Luni is one of the most beautiful in northern Italy. The first traces date back to 177 B.C. but construction work on this centre continued until the thirteenth century. More than a thousand years of history are found in this settlement, from which the marble for the "Eternal City" once set out. Today, Luni bears testimony to the passing of the Roman, Byzantine and Saracen civilisations.

The Museum is built on the ruins of the Capitolium and houses countless archaeological finds and unique, priceless documents. It is surrounded by the old city, the area of the Great Temple, the Covered Theatre, the House of Mosaics and a large domus with floors made of multi-coloured mosaics portraying mythological scenes. South of the Capitolium, a temple dedicated to the god Jove, lie the Forum and the House of Frescoes. North of the domus lies a deposit of terracotta urns and the Small Temple dedicated to Diana. The Mausoleum, an impressive funereal monument, was built outside the walls along with the Necropolis and the Amphitheatre from the first century A.D., of which the skeleton of the cavea still remains.

The nearby airport of Luni Mare, in addition to being an important military base, offers the possibility to take airborne trips over the entire area of the Apuane Alps towards the Cinque Terre.

The ruins of the Amphitheatre are spectacular, although with its 6,000-spectator capacity, it is one of the smallest amphitheatres from Roman times to have come to light so far. When visiting these places, it should be borne in mind that they once looked out to sea, which today lies several kilometres away.

From Sarzana, 20 minutes by bus; slightly less by car following the Aurelia road towards Pisa or Viale XXV Aprile which arrives in Marinella.