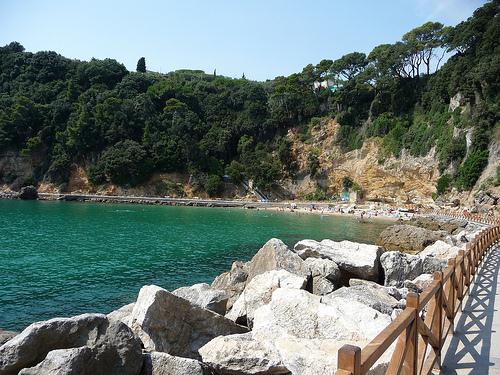 This hamlet of late-medieval origins worked its charms on English poets Byron and Shelley, who discovered it in the nineteenth century when they stayed for some time at Villa Magni, a building dating back to the mid-eighteenth century. There are many monuments recalling the passing of the two great poets, whose names inspired that of the area, which is known as the "Golfo dei Poeti", meaning "Gulf of Poets". Playwright Sem Benelli wrote his renowned play, "Cena delle Beffe" (The Jesters' Supper) here.

Venere Azzurra is a sandy beach, behind which one can find tennis courts, the municipal swimming pool and the Golf Club. A visit to the grounds of Villa Marigola, where exotic and Mediterranean plants grow, is recommended. At San Terenzo: the Castle dating to the fifteenth and sixteenth centuries comprises a construction with a small, square tower erected on a rocky spur. It houses a permanent exhibition dedicated to the English poet P.B. Shelley. Church of Santa Maria Assunta: sanctuary of Madonna dell'Arena, rebuilt in the seventeenth century, drawing on a fifteenth century slate painting as its source of inspiration.

Legend has it that San Terenzo owes its name to a Scottish navigator who, having set foot on these coasts, dedicated his life to the needy. At his funeral, the oxen pulling his corpse ground to a standstill on this spot and could not be moved; from that moment on, the place was named after him.

On foot or by car: just a few minutes away in the direction of La Spezia, following the coastal road. By bus: line S or L for La Spezia.