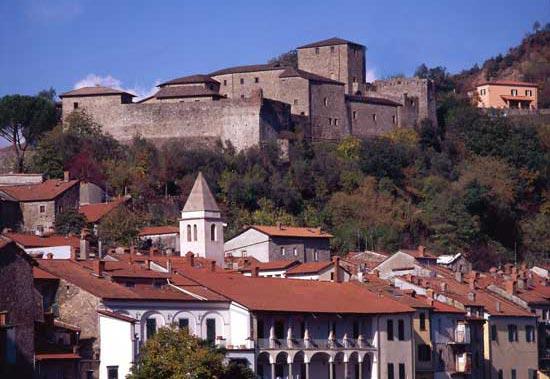 The town of Pontremoli, the largest centre in the Lunigiana area, was established in the tenth century. Initially small and huddled around the castle of Piagnaro, it expanded in the centuries that followed, until it was divided in two in the thirteenth century by the Cacciaguerra Fortress. Its position along the Via Franchigena pilgrim route made it a trade centre that was hotly disputed by the various Lords.

The Old Municipal Building and the baroque Duomo with its artistic forms of outstanding beauty. The Cacciaguerra Tower, which separates the old part from the new and dates back to the fourteenth century. Piagnaro Castle, from the tenth century, was erected on the narrow strip of land between the River Verde and the River Vara, situated in the village of the same name which takes its name from the nearby quarry of "piagne" (tiles used for house roofs). This fort has been transformed into a place of culture since it first housed the National Museum of Stele Statues, a collection unique of its kind anywhere in Italy, which gathers together votive monuments dating back to prehistoric times. The stylised silhouettes of human figures sculpted in the rock have maintained their fascinating qualities intact even though three thousand years of history have elapsed since then. In the second part of the town, the stately buildings from the Florentine period dominate the streets and are worth seeing. In the centre of Pontremoli, the Clock Tower divides the two squares. The Church of San Francesco was expanded in the fifteenth century and contains fine sculptures and a fine colour bas-relief, the "Madonna col Bambino" (Madonna and Child) attributed to Agostino di Duccio.

Every year in July, Pontremoli revives its literary traditions established in the eighteenth century when it plays host to the "Bancarella" and "Bancarellino" Literary Awards. These events remind us of the fact that it was the local bookshop owners who, several centuries ago, helped the sales of books in the open to spread throughout Italy.

Following the Via Cisa (highway SS62) or the A15 motorway La Spezia-Parma, take the exit for Pontremoli.