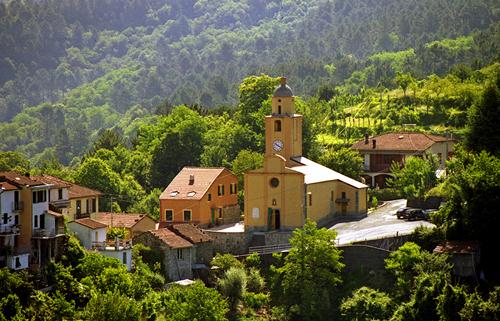 There are many testimonies from the numerous families that took turns over controlling this valley during the period of feudalism. Whilst mostly subjected to the control of the Malaspina family, the Val di Vara valley was disputed by the most powerful families until the sixteenth century, a period in which it fell under the rule of the Republic of Genoa. Prehistoric remains, however, bear witness to settlements dating back to before Medieval times.

In the local inns, try the simple yet delicious dishes like "pansotti" stuffed pasta in walnut sauce, and the homemade pasta with mushroom sauce, of which there are a great deal in the Vara valley. In the various fetes held, the culinary aspect is never absent, with products from the forest and chestnuts cooked in every conceivable manner. There are many gastronomic fetes in which fritters, mushrooms, salt cod, porchetta (pork roast) and more besides are all present.

The Val di Vara area has maintained its environmental characteristics intact over the course of time. The forests reach as far as the eye can see. The harsh, wild countryside is crossed by the only real river in Liguria, the Vara, which then flows into the Magra. This territory is far from the sea but remains fascinating nonetheless. It starts in the province of La Spezia and reaches as far as the confines with the Parma area. The territory is marked out by tall mountains that soften into green pastures, waterfalls imprisoned within channels and forests of Holm oaks and chestnuts that alternate with one another throughout the entire Val di Vara.

From Sarzana or La Spezia, following the A12 motorway towards Genova, come off at the Brugnato exit after around 15 minutes.