Portovenere, le Grazie and the Islands 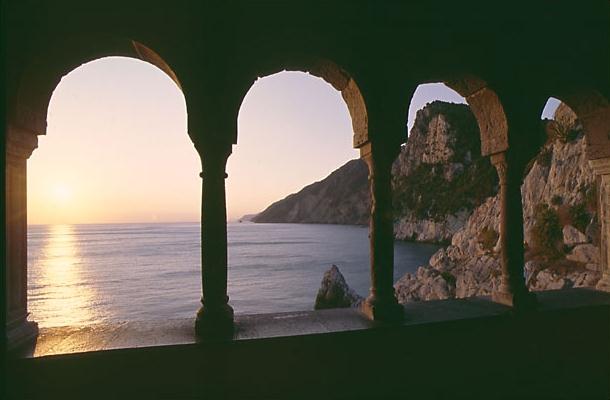 Known since Roman times, the hamlet developed with monastic settlements, bearing witness to the power possessed by the Luni bishops. Following Longobard dominion, it passed into the hands of the lords of Vezzano. After 1100 it became part of the Republic of Genoa, which expanded and fortified the village in opposition to its enemy, Lerici, which was the vanguard of the Pisans.

At Le Grazie: Church of Santa Maria dating back to the fifteenth century, with its late-Gothic forms, and the adjacent remains of the ancient cloister. The Roman villa of Varignano from the II-I century B.C. The Antiquarium, a collection of finds unearthed in archaeological digs. The rustic part with the remains of the oil press. At Portovenere: La palazzata, a barrier of houses 5-6 storeys high erected to defend the town and later turned into homes. Via Capellini in the centre, with its sculpted slate portals and underpasses towards the esplanade by the sea. The church of San Pietro from the thirteenth century sits on the square by the same name high up above the sea, and has a black and white striped façade. From this church a stunning view can be enjoyed out towards Lerici and the Apuan mountains, as well as towards the coastline of the Cinque Terre. The Parish Church of San Lorenzo dates to the twelfth century, and features a Romanesque and Gothic-renaissance style. It is home to paintings of unrivalled beauty. The sixteenth century castle which dominates the village can be reached by climbing a steep flight of stairs. Boat trip to the Grotta Azzurra (Blue Cave) on Palmaria Island.

For trekking fans, path no. 1 of the Italian Alpine Club starts from Piazza Bastreri, in the centre of Portovenere, arriving in Levanto 12 hours and 40 km later.
On the island of Palmaria, an easy path will take you on a tour of the most characteristic places in around 3 hours. Boat trips leave for the Cinque Terre, the islands of Palmaria, Tino and Tinetto and La Spezia.

You can savour a soup made with date mussels, delicious molluscs extracted from the rocks. Octopus, which takes centre stage in a fair held in September, is a must (the trick for making it tender is to cook it with an ordinary cork stopper). Once cooked, oil, garlic, parsley and boiled potatoes enhance its flavour.

The coasts of the three islands find a succession of outcrops and picturesque caves. The most famous are the Grotta Azzurra (the Blue Cave) which takes its name from the colour of the water that surrounds it completely, and Grotta dei Colombi (the Cave of Doves), a place where archaeological finds have been uncovered. Tinetto is the outermost and the smallest of the islands, and has some of the most beautiful sea beds in the Ligurian sea. Tino is home to the abbey of San Venerio, patron saint of the Gulf, and the Napoleonic lighthouse which watches over the entrance to the Gulf.

By bus: the line to La Spezia and subsequently line P. By boat: 30 min. By car: one hour.