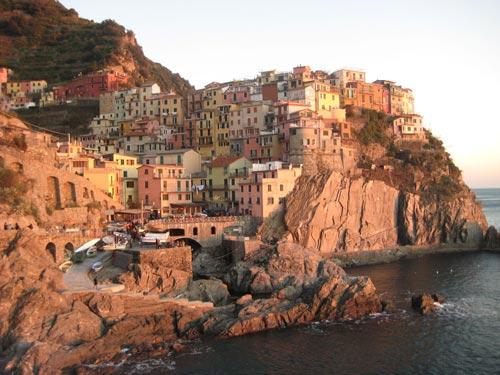 The name Manarola supposedly derives from Latin, confirming the Roman roots of this settlement, the centre of which lay in nearby Volastra. It was from this site that the first settlers set out, and in Medieval times they fell below the rule of the marquises of Carpena and subsequently the fiefdom of the Fieschi family, to whom the village was transferred by the Bishop of Luni before becoming Genovese in the thirteenth century.

The parish church of the Natività di Maria Vergine houses prized works of art, and is distinguished by its sandstone façade. The bell tower is detached from the body of the church because it once served as a lookout tower. The "spiaggione" is a long beach with facilities, and is the last on the Cinque Terre stretch.

A pleasant walk to Punta Bonfiglio, where you will find a green area with an exceptional view over the village. One hour from the centre lies the Santuario della Salute (Sanctuary of Health), a Gothic reworking of the original Romanesque church, inside which is a fourteenth-century painting of the Virgin Mary, who is feted on the first Sunday of every August.

Seek out the local wines in the stores on the main street, amidst the boats pulled up to dry. "Costa de Campo" or "Costa de Posa" will be perfect for accompanying freshly caught grilled fish.

From the station, one reaches the village through an old railway tunnel; going up, one reaches Groppo, home to the vineyard cooperatives for the entire Cinque Terre area. Just a short way away is Volastra, famous for its olive groves that cling to the steepest slopes.

Manarola can be reached on foot from Riomaggiore via the "Via dell'Amore" or Lovers' Path. By car, in the direction of Monterosso, it takes around ten minutes.