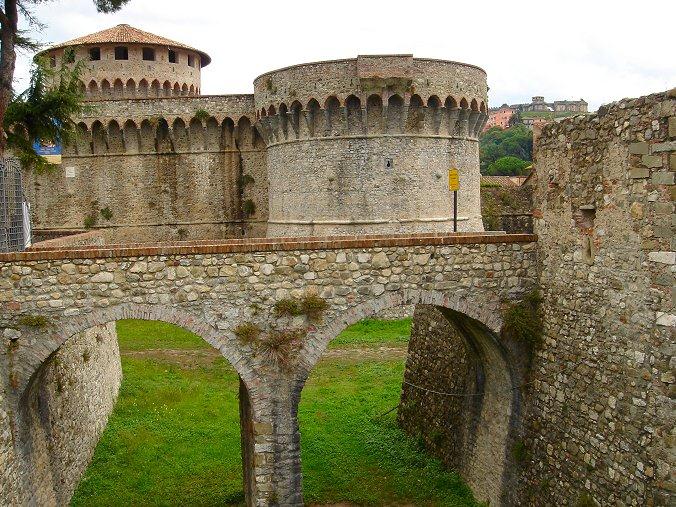 The origins of this town, which is the second-largest centre of the province of La Spezia, date back to somewhere between the tenth century and the year 1000. In the thirteenth century it became the home to the Bishopric, and was disputed as a fortified town by the various neighbouring potentates who, after the sixteenth century, handed it over to the Republic of Genoa. The numerous dominions have left ample traces of their passing in this town, traces which can still be seen to this day.

The church of San Andrea, patron saint of the town, a Romanesque parish church rebuilt in the sixteenth century and built on ancient catacombs which can be visited inside.
The Cathedral of Santa Maria Assunta houses priceless works, enveloped in the evocative atmosphere of the shadowy naves. The Fortress of Sarzanello dominates the town from atop a hill: this late-medieval construction is perfectly preserved, and affords a breathtaking view of the entire Magra valley. Hidden courtyards and period palaces in the historical centre conceal traces of famous personages who once passed through here, such as Napoleon Bonaparte. Still in the historical centre, the Cittadella is an ancient Genoese fortification which was once a prison and now plays host to exhibitions, and is open to the public. "Soffitta in strada" (Attics in the street) is an antiques market held under the stars, and each year in August it attracts lovers of furniture and objects from yesteryear. The municipal Palazzo Comunale dates back to the sixteenth century and features an open-air courtyard, rendered still more interesting by the archaeological finds from the digs in the Luni area.

Discover the shops and artistic workshops in the "fondachi", the narrow streets of the historical centre, or the elegant shops situated in the centre's streets. Cafes and venues are open until late, allowing you to sample Sarzana's many traditional dishes. On leaving the town you will find shopping centres and hypermarkets along the Variante Aurelia and Variante Cisa roads. The weekly market invades the town on Thursday, offering goods of all types.

"Spungata" and "Buccellato" are the local sweets: the first is pastry filled with dried fruit, whilst the other is a cake made in a ring shape and sprinkled with sugar. It can be made in a variety of sizes. If you are not a fan of sweets, walk into a baker and try the "farinata" (a dough made with chickpeas baked in the oven) or the savoury rice cake. Or the vegetable tarts, bread, homemade pasta and the "cima" (meat stuffed with vegetables). If you enjoy good food and wholesome ingredients, this town will prove to be an authentic paradise for you.

The façade of the Santa Maria Cathedral has a "sword set in the stone" many metres above the ground, which is the source of countless legends.

From Lerici, 20 minutes by car, taking the provincial road towards Sarzana. By bus from Piazza Garibaldi, line S.