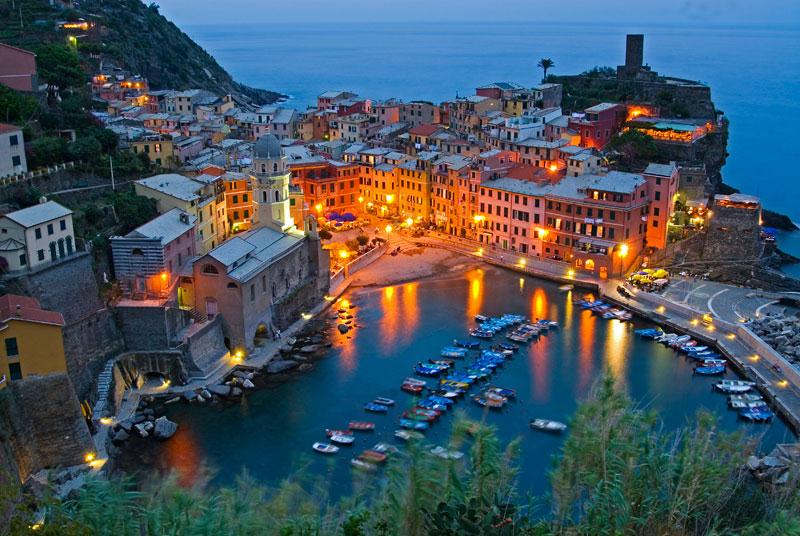 In Medieval times, Vernazza expanded its seafaring activities considerably, until in the thirteenth century it was hit hard by the Genovese, who had tired of piracy attacks that passing ships were subjected to. A few years later it fell under the rule of the Republic of Genoa and became an arsenal for the construction and storage of boats.

The steps and the "carruggi" or narrow streets of the village, which are crammed with fishing boats pulled up to dry. The tower of the Castello dei Doria castle is the last testimony to the Genoese fortifications. The thirteenth-century church of Santa Margherita di Antiochia is worth seeing, with its interiors entirely carved in stone. Also worthy of note is the bell tower, which is over 40m high. The Nostra Signora di Reggio Sanctuary, surrounded by centuries-old trees and terraces cultivated with vineyards, preserves thirteenth-century remains of charming beauty.

In the narrow streets, trattorias and cosy venues will welcome you in to tempt you with some Tian, a pan of anchovies and roast potatoes, as well as with Vernazza's traditional dessert called Stalin. In the fete of the patron saint, gastronomic stands offer traditional peasant dishes.

By car towards Monterosso, around thirty minutes setting off from Corniglia. On foot, skirting the "Sentiero Azzurro" path westwards. By boat from Lerici, La Spezia and Portovenere.