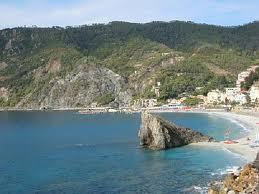 In the seventh century, after the Longobards had razed it to the ground, Monterosso was rebuilt by the inhabitants of Albareto, who also built the Mariano di Soviore Sanctuary. After centuries of clashes between the Pisans and Genovese, in 1254 the Republic of Genoa obtained definitive control.

The parish church of San Giovanni Battista, an example of Gothic architecture from the fourteenth century with a two-tone façade. The Convent and capuchin church of San Francesco lie on the hill of San Cristoforo and are home to paintings by famous painters. The sanctuary of Madonna di Soviore is a destination for frequent pilgrimages, and is renowned for its beauty. Inside, archaeological exploration has confirmed its ancient origins. The outside, set amidst a forest of centuries-old Holm oaks, affords a view that guards no secrets opening out onto the Tuscan archipelago, Corsica and the entire Gulf. Set in a panoramic position, the Eremo della Maddalena hermitage conceals a late medieval cloister that is still perfectly preserved. The Torre Aurora tower was erected right above the sea, and was used as a lookout tower. Villa Montale was the residence of the celebrated poet Montale, who spent his childhood summers on the shores of the beach known as "La Fegina".

In addition to producing excellent wines, Monterosso is renowned for its anchovies. Cooked in every possible way, or preserved in salt; try them in a pan with potatoes, accompanied by a "dry white wine". The village's dessert is reminiscent of the "torta pasqualina" egg and ham tart, but instead uses shortcrust pastry, apricots and cocoa: a must!

By car, it is the last village to the west and lies 30 minutes from Vernazza. On foot it is the end of the line on the "Sentiero Azzurro" path. By boat from Lerici, La Spezia and Portovenere.